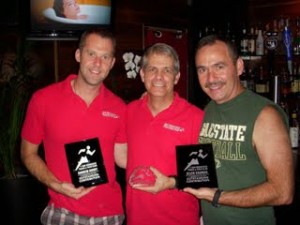 At the end of the year celebration, the Club acknowledged and presented awards to three exceptional members of the Club. Please join us in congratulating the fantastic three: Andrew Bundy, Chris Goodwin, and Allen Eggman (from left to right pictured below).

Chris earned Award of Excellence for his superb performances on the track in 2011, as well as his contributions to the team as the Board Secretary and the unofficial coach. In 2011, Chris competed in Senior Games, World Masters Athletics Championships, and Pride Meet. Despite such a busy schedule, he remained healthy and injury-free, and produced great results in the competition. In addition, he showed very firm commitment to the team, coming to the practice practically every Sunday and led the team with dynamic stretching exercise and sprint training program. His service on the Board as Secretary allowed the Board to conduct its business smoothly and effectively.

For years, Allen was our sole source of fundraising, organizing garage sales, beer busts, a booth at (the now defunct) Harrison Bear Fair, food service at Lazy Bear, etc.. He also stepped forward to encourage, support and coach us in field events. We have a team full of decathletes because of Allen’s dedication and skill at showing people how to pole vault, high jump, throw the discus, the shot and the javelin. On top of all that, he’s an amazing athlete and a great inspiration to the team with his all-around track and field skills. He was our first ever Gay Games gold medal decathlete and because of him our team will have many more in Gay Games to come.

Andy’s achievements on the track are also legendary and inspirational. But it was through his persistence and drive that we are the team we are today: He got us to become a non-profit organization, which led us to form a Board, and then to get money-making booths at SF Gay Pride and Folsom Street Fair. He organized and followed through with establishing and continuing to run the Pride Meet which now attracts athletes, gay and straight, from around the world. He’s gotten us fundraisers at the Lookout and has lead the team as Board President several times. Through his leadership skills, we have become such a formidable track Club, both on the track and financially speaking.
Big congratulations to Chris, Allen and Andy. We look forward to seeing you on and off the track (and field) in the new season!
Share this
FacebookTwitterGoogle+
Related posts