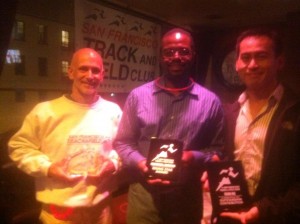 Thank you for coming to the year end party at Lookout on Nov 21. It was good to see the familiar and new faces. As in the past 2 years, the Club acknowledged three exceptional members and presented awards this year. Congratulations to this year’s recipients Marcus Valera, Marshall Jackson and Sean Au. Also, a huge thank-you to those who served on the Club Board for the fantastic year. Craig as President, Mark as Secretary and Thomas as MemCom Director will leave the Board as of Nov 30. New Board of Directors have been voted in and ready to start working with the Club on Dec 1.

Marcus had a big year. He had qualified for National Senior Games last year and successfully competed in it in Ohio this year. In addition to National Senior Games, he competed in Bay Area Senior Games, USATF PA Championships and Pride Meet without major injuries. All of this goes without saying that he was a regular at team practice, fog or shine. He has been an inspiration to many of us this year. Off the track, he helped the Club at fundraisers. Congratulations, Marcus!

Marshall joined the Club earlier this year without much competition experience. He started with dynamic stretches and drills, and slowly started to run under coach Chris’ supervision. For someone who came to our team with no “aptitude” for running track, he has made great strides (no pun intended) in mastering track running and he’s changed his physiology as a result – it is an inspiration to everyone to see him try his best week after week and not give up. He looks forward to continuing with the Club, not only as a runner but also a competitor at next year’s Gay Games. Off the track, he has accepted to serve the Club as Secretary for 2014. Congratulations, Marshall!

Sean has been a fixture at our team practice for quite some time now, but this year, he has made a great contribution to the Club on and off the track. Off the track, he was the major driver for all fundraising events: Pride, Folsom and Castro. He planned, prepared and worked at the booth, spending numerous hours. Without Sean, we would not have been able to stay as financially afloat as we are this year. Also, he served on the Board as Treasury in the past two years, and is going to be Vice President for 2014. On the track, he competed in all major track meets as a sprinter and a thrower. In addition, he traveled to Antwerp to represent SFT&FC in the international competition. Congratulations, Sean!