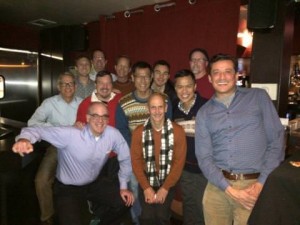 It was great to see you at the year-end party on Wednesday! For those who had to miss it, member of San Francisco Track and Field Club celebrated the fun and successful 2015 at Lookout in the Castro. We had much to celebrate this year: High quality workouts at team practice, Pride Meet with record number of participants, strong representation by our members at Euro Games in Stockholm, and impressive amount of money raised at our fundraisers. Congratulations and many thanks to everyone who helped the Club throughout the year. Extra appreciation goes to board of directors (Sean Au, Rick Thoman, Dave Dibley, Koji Kawano and Marshall Jackson) who volunteered their time to plan and execute various events and activities. As the 2016 board (Thomas Setser, Phil Aguilar, Marshall Jackson, Gwynn Villegas, Koji Kawano and Rick Thoman) kicks off a new year, we continue to be reminded of our mission and look forward to making 2016 a fantastic year with you!

Now a club tradition with five consecutive years of recognizing our members who showed exceptional contribution and performance, the board acknowledged and presented this year’s award recipients: Marcus Valera, Chris Goodwin and Sean Au.

This is Marcus’ second Award of Excellence (first award in 2013). As Rick noted at the party, it is not easy to be producing PRs when you are of a certain age. But Marcus ran 27.87 PR in 200m at Pride Meet this year. His marks in other events and competitions were as impressive. He trained hard and competed aggressively, which was inspiration to all at the team practice and track meets.

Chris works hard on the track and off. As everyone knows, he is the one who puts together the workout program. He studies and checks in with other trainers, such as Mark Jellison to make team practice as good as it can be. He is already thinking of designing workouts to help you get faster and stronger in 2016. This year, he also served as a booth captain at Folsom Street Fair where we generated the biggest revenue ever!

Club President is responsible for quite a few things, and it often goes unappreciated. But Sean held the position without any help from neither Vice President nor Membership/Communication director and showed leadership. In addition, he co-captained at SF Pride beer booth. And, he delighted the members with Movie Nights where members were invited to see a total of seven films throughout the year.