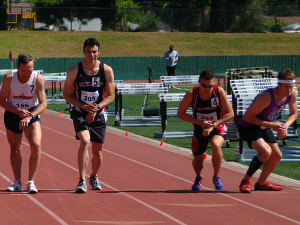 On June 20th at the 8th annual Pride Track & Field Meet held at San Francisco State University, Irene Obera is hoping to break a couple of world records …her own…again!
Last year, Obera, 81, of Freemont, CA, bested her previous record in her age group as well as setting the new world record in the 80m hurdles and 200m hurdles with 19.62 seconds and 48.27 seconds, respectively. Said Obera in a recent interview, “I am most proud of the 80m hurdle world record I set at last year’s Pride Meet, because my goal at the time was simply to finish the race without injury or mishap. I had only taken up the hurdles as an event a few weeks before the meet, and had never actually run over a complete set (of hurdles) before. So the record came as a surprise and I was elated!”
Obera appreciates the opportunity to compete in one of the few United States Track and Field (USATF) sanctioned events in the Bay area and thanked Pride Meet director Andrew Bundy for making the extra effort to get a regulation set of 27″ hurdles from a local high school that Chabot College did not have for making last year’s world records possible. The Pride Meet is sponsored by the San Francisco Track and Field Club which “seeks to dignify, to promote gay and lesbian athletes and to be inclusive of all ages (Open, Masters Seniors), all genders, all races and all abilities.” The Pride Meet website explains the event is designed to provide athletes of all sexual orientations with an opportunity to compete in a welcoming. All athletes aged 18 years and older are eligible to register and participate in the event. This year the Pride Meet is included in the Pacific Association USATF Grand Prix series. Registered Pacific Association athletes can earn points for individual performances (For a full schedule of events, visit San Francisco Track & Field’s Pride Meet website: http://pridemeet.org/meet-info/).
Obera’s record-breaking attempts are sure to add excitement and drama to this year’s Pride Meet. “Records are just made to be broken,” she said, “ so I wouldn’t mind breaking all of them!” Her won enthusiasm for the sport is clearly appreciated by other USATF Master’s athletes. Said Obera, “One of the nicest compliments I received was at the recent Pacific Association Masters meet when an older male athlete came up to me and said he just wanted to shake my hand ‘for all you do as an ambassador for the sport.’ It’s nice to think that people draw inspiration from me for doing something that I enjoy and love to do.
About San Francisco Track & Field Club
The San Francisco Track & Field Club – founded by Dr. Tom Waddell, founder of the Gay Games – seeks to dignify and promote gay and lesbian athletes and athletics, and be inclusive of all ages, genders, races and abilities. The club stresses the joy of sport while attempting to nurture athletic ability, always encouraging each other to strive for personal best achievements. The club provides an avenue for athletes (men and women) to showcase their talent, pride, courage and ability to endure. Learn more at http://sftrackandfield.com/.